Hey, if you’ve seen me out and around, I’m probably with one of my therapy dogs. I’ve been a trainer and provider of Pet Therapy Dogs for over 25 years. You see, I work with psych hospitals, head trauma clinics, and private clients. Many of these people have a disconnect with others around them. They often suffer with thoughts of suicide. Suicidal thoughts can happen to someone when the stresses of life exceed their ability to cope. Those suffering from suicidal thoughts often feel alone and isolated. That’s a lie; you’re never alone.

That’s where my dogs come in. People can have difficulty relating with other people, but most can relate to a dog. What’s the difference?

When was the last time a dog laughed at you or made fun of your clothes or even cared about where you came from? It’s never happened to me! Most dogs I’ve known are only interested in when’s dinner, where’s the ball, and nap time.

Dogs Give Unconditional Love. They don’t make you jump through hoops for their affection. They love you just as you are, which takes a lot of stress off of some people who can get too concerned about the opinions of others. Just having a dog around reduces stress and anxiety, loneliness and depression.

Dogs Add Purpose To Our Lives. You have someone who depends on you and gets you out of the house, which can be a real accomplishment for some. Caring for an animal has also been shown to improve self-esteem, physical health, and socialization for both the person and their four-legged friend.

Social Interactions Improve. Though Animal Assisted Therapy can serve a number of different needs, it can be especially useful for teens that struggle with social interaction for any number of reasons. When animals are incorporated as part of the teens’ therapy, teens have an easier time gaining back these interaction skills compared to using a therapist alone.

Reduce Stress and Anxiety with a Therapy Dog

In an article on Petguide.com, it says, “While a pet cannot actually understand what you are going through or provide verbal support, dogs are actually capable of reading human body language and expressions. This means that your dog knows when you are in pain, and some studies suggest that dogs are capable of empathy.”

“Cynthia Chandler, Ed.D is a counseling professor at the University of North Texas, the Center for Animal-Assisted Therapy’s founder and director and the author of Animal Assisted Therapy in Counseling. Dr.Chandler says the research is out there and has been increasing since 2002. She cites one study, for example, that showed a significant drop in stress hormones such as cortisol, adrenaline and aldosterone and an increase in “health inducing and social inducing” hormones such as oxytocin, dopamine, and endorphins after 20 minutes with a therapy dog. Working with a therapy animal has also resulted in behavioral improvement in children and a reduction in depression for elderly with dementia.” (psychcentral.com/lib/the-truth-about-animal-assisted-therapy/)

As for myself, I got the greatest job in the world where I get to bring my dogs to work and show those who are willing to see that there is still hope out there and to know that someone, or something, still cares.

How Dogs Can Help Prevent Suicide 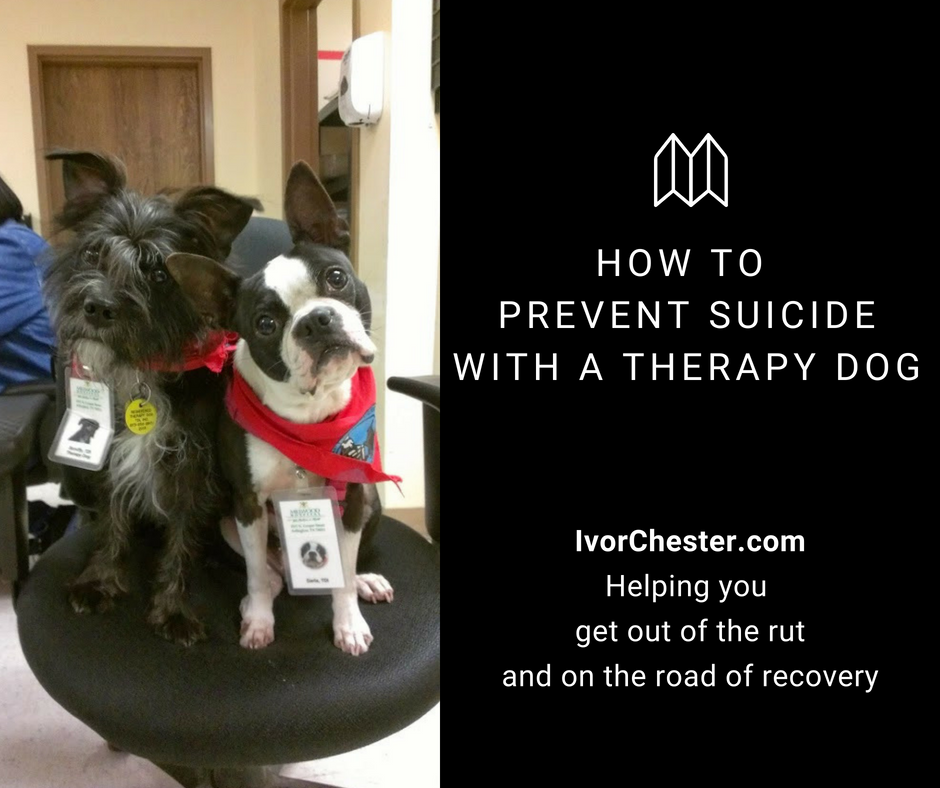