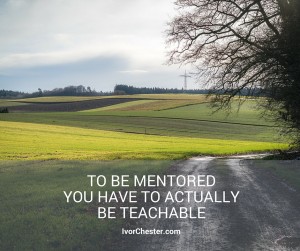 Okay, at this point, I need you to turn your ears on. If you’ve spent any time with me, you should, by now, understand the idea of worth. Everybody’s got it, we don’t earn it, nothing can take it from us but ourselves and it is the very reason we treat ourselves for good or bad. With that said, you’re gonna have to understand an important concept on mentoring. I’ll explain with an illustration.

Several years I go, I was working with what was called, “At-Risk” youth. These were kids that grew up tough, had made some bad choices, and were, “At-Risk” of doing long term jail time. One day, I made 5 pans of brownies for the group. As with most of these groups, there was a leader who had the biggest mouth, the toughest attitude and wanted to be the Alpha dog. This lesson was for him. I baked each pan according to directions except one. It was in a blue pan. That pan I took outside before I put it in the oven and scooped up some dirt and sprinkled it in. Yes, I did! When the kids arrived, I had each of the 5 pans on the table, cooling. They came into the room, and I told them have a seat. The Alpha Boy come into the room, noisy, showy and full of attitude. Once I got their attention I told them we were going to have brownies. “Yeah, Yeah!”

But I quieted them down and told them straight out, “There is dirt in the blue pan.” At first, they all laughed and said, “Oh, you wouldn’t do that, no way!” I assured them, “Yes, I had put dirt in the blue pan. Please listen to me.” The other kids became wary but Alpha Boy just got louder and gesticulating wildly, telling the other kids, he didn’t believe me. With that, he cuts into the blue pan of brownies, drops it on a napkin and takes a bite.

All eyes were on him as he took the bite. It took only a second before he spits it to the floor and shouts, “There’s dirt in the brownie, man!” And all I could say to him was, “Why didn’t you listen? Have I ever given you reason to not trust me?” You see, he was not willing to be lead, he wanted to lead with faulty information from incorrect beliefs. And he ate the brownie.

If you want to be mentored by me, you’re gonna have to be teachable. You can’t grow roses on rocks, you can lead a horse to water…whatever trite saying you want to plant here. Don’t it because you’ll just waste both our times not following someone who cares, who has the experience and is listening. You don’t want to get better, the best pills, the best doctors, the best operations the best faith will not heal you. Only you can heal you if you have the humility to be lead.

You can try to put this on me by saying, “You’re in it for the money.” and I’ll put it right back on you by saying, “Why are you here instead of surfing social media or using?” You want the help. Stop going only so far and when it starts getting tough, bail out! You can do this. Really, I believe you can do this because I’ve seen it done by people who couldn’t operate a computer keyboard when they showed up at the hospital. You’re ahead of that, so let’s stop the negative self-talk and get down to drawing the line in the sand and saying, “I can do this, but I’m gonna need a little help.”

Let’s do this, together!