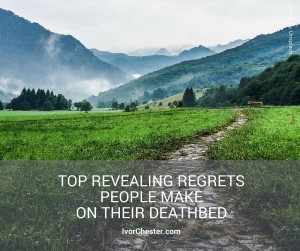 Be like Frank Sinatra and do it your way. So you’re not a rich, famous and handsome man with your pick of the ladies. That doesn’t mean you can’t pursue and hopefully fulfill your dreams. Ask that crush on a date, then think of something romantic, creative and frugal to woo them — a milkshake and a sunset worked on me. Not fulfilled in your current job? Launching a proper job search is a remedy.

Bronnie Ware, the nurse who compiled the list, says unfulfilled wishes were the most common regret among her patients. Those who had that regret “had to die knowing that it was due to choices they had made, or not made.”

Just because you don’t kill yourself on the job doesn’t mean you’ll be broke. Consider this: Dutch workers are on the job about 400 fewer hours a year than Americans, yet they have “robust personal savings,” says Bloomberg. Americans average almost 1,800 hours per year at work versus less than 1,400 for the Dutch. Not only that, but the Dutch were listed fifth in the world a few years back for life satisfaction. Americans weren’t even close.

“By simplifying your lifestyle and making conscious choices along the way, it is possible to not need the income that you think you do. And by creating more space in your life, you become happier and more open to new opportunities, ones more suited to your new lifestyle,” Ware says.

Another case in point: Harvard researchers forced a group of professionals — accountants, lawyers, investment bankers and the like — to back away from their workaholic tendencies by logging off of the matrix after office hours and actually taking their allotted time off.

In the study, a control group performed normally, meaning they worked 50 or more hours each week, skipped part of their vacation time and were constantly on call. The career-minded individuals who clocked a regular 40-hour schedule and left their work cell phones at the office when they went home “reported increased learning and development and better communication with their teams and, most surprisingly, they actually produced more total output than their workaholic colleagues,” the four-year study found.In addition, they noted higher satisfaction with both their job and in finding the proper balance of personal time.

In a brilliant infographic inspired by Ware’s work, Addicted2Success illustrates regrets of dying people, including those who regretting not having said “I love you” more often — a problem easily remedied at no cost. Others addressed speaking one’s mind in order to not harbor resentment and resolving conflicts rather than holding a grudge. “Many people suppressed their feelings in order to keep peace with others,” Ware wrote. “As a result, they settled for a mediocre existence and never became who they were truly capable of becoming. Many developed illnesses relating to the bitterness and resentment they carried as a result.”

Technology makes this easier and cheaper than ever.

Facebook, anyone? Shoot a text. Compose an email. Support the dying Postal Service and write a letter. Ware says that everyone misses friends when dying. Keep in contact and you won’t have that longing. “It all comes down to love and relationships in the end. That is all that remains in the final weeks — love and relationships,” she adds.

Laugh a little and smile more, and it could increase more than your mood. The Wall Street Journal says a study of more than 10,000 young Americans found that those who reported being happier and more positive had a higher income by age 29. “The analysis suggests happiness isn’t just linked to higher income — it’s helping generate it. That could be because happier young adults are more likely to earn a college degree, get hired and promoted, be more optimistic and less neurotic,” the Journal says.

This regret comes from Addicted2Success and was not on Ware’s list. Perhaps it should have been. A recent study shows that 28% of Americans don’t think they’ll have enough money saved to retire comfortably, according to The Journal. Also, 57% of U.S. workers surveyed had less than $25,000 in savings.

Remember that it’s never too late to start saving.

“Failing to plan for the retirement years leaves people destitute in their old age. When that happens, their last moments on earth can be very difficult and miserable,” Addicted2Success says. Do you worry that you’ll have regrets near the end of your life? What steps are you taking to avoid them?

“It is better to shoot for the stars and miss than aim at the gutter and hit it.”