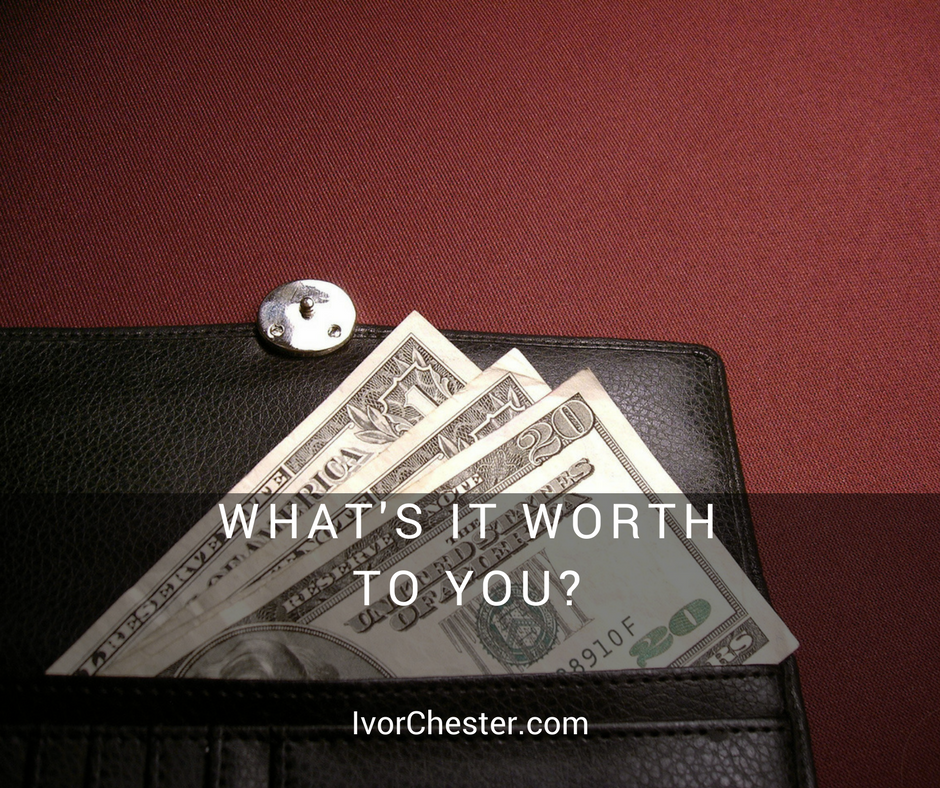 What are you worth?

Late at night on a warm Texas summer evening, I was pulling out of a gas station on my motorcycle. I had just put in my last $1.75 and it had to last me until my work study check came in on Friday. It was Tuesday night. As I turned out onto the street, something in the middle lane caught my attention. It was a wallet! Slowing down to scoop it up, I then pulled over to check it out. It was a black leather biker-style with brown whip stitching around the edge and a silver medallion in the middle with the initial “K”. It was fat and heavy, and when I turned it on the edge I could see why. It was loaded with cash!

Suddenly, I became intently aware of my surroundings. Giving a quick glance about me, I tried to get an idea of just how much without pulling it out of the wallet for all to see. Within was more money than I had seen in a long time. I had to make efforts to repeatedly inhale, as I counted higher and higher. It was all in 20 dollar bills and I only had to count it once to know it was an enormous amount of money to find and to lose. Just over $2,100! I held it against my stomach and blinked in the light of the blue-white halogen lights.

My hands shook as I check the wallet again, this time for ID. Scraps of paper with names, no phone numbers or addresses, just cash. It was mine! Finders keepers! Party time! I was gonna be crazy popular back at the community college with this stash! Think of the girls! I could stop and get a burger from some greasy, all night burger joint! Yeah, I was thinking big! Pulling me from my parking lot reverie was a rust green Oldsmobile blaring Pink Floyd as they cruised by with open trash bags of aluminum cans in the back seat.

“What if it’s theirs?” I said aloud. Looking down at the wallet in my hands, I knew it wasn’t mine to keep. Even then I knew I may eat better but I wouldn’t sleep better. So, what next? No name or number. Couldn’t put it back in the street and hope for the best and if I turned it into the police, I’d never get any closure. With the wallet still in my grip, I threw my hands in the air and went back to the gas station. Parking the bike to the side, I tucked the wallet into my jeans, sat on a curb and waited, believing the owner of the wallet would have enough faith to return. At least, that’s what I called it. Faith. My action, returning to where I found the wallet, was an act of faith that the owner of the wallet would believe in the worth of the wallet and commit an act of faith and come looking.

My belief was rewarded within about a half an hour by a car tearing into the station like Steve McQueen. Kicking open the driver’s side door, a frantic, shirtless, wild-eyed guy erupted from the car. His hands on top of his head with his fingers entwined onto his long black hair, he caused great alarm as he ran and darted between cars at the pumps. One moment he was flat on the ground in the oil and dirt looking under the automobiles, the next he was jumping to look on top of the pumps.
I found my man, he had the faith.

Taking a deep breath, I kept my hands to my side, and tried to make eye contact as I walked measuredly towards him. I got surprisingly close without him paying any attention to me. Tried waving and clearing my throat as he continued his mad search. Finally, I spoke up and said, “Hey. What ‘cha looking for?” He apparently wasn’t looking for my assistance and told me to do something to myself that is anatomically impossible. That was one.

Not wanting to give up, I tried again, “So, what does it look like?” Trying to let him know that I knew something of what he was doing. Again, he repeated his epithet with vivid descriptive language. That was two. At three, I reasoned, I’d have earned the money and could walked away with a clear conscience.

Preparing myself for another round of this guy’s gratitude, I decided to change my approach and go the more direct route. Making direct eye contact, I said in my best Lee Marvin, “I know what you’re looking for.” Locking eyes on mine, he froze. Then standing up straight for the first time since he got there, he just breathed. I saw in him, in the flash of an eye, both fight and flight. “What, what, what, what?” chattered from his tight mouth. “What do you mean? What do you have?” Now that I had his attention, we could talk.

Moving his hands to form the shape of the wallet, his words came in fits and starts. “It’s about this big, black leather…” and his breath left him here, making him gasp to restart the sentence. “…wallet. With a silver medallion on one side.” He looked at me hopefully. Not wanting to give away too much, perhaps to make him pay for his earlier anatomical suggestions, I asked, “What’s on the medallion?”

I had him. I could have walked away but then I would have been right back where I started. After a breath, I pulled the wallet out and stretched to hand it to him.
“YES!” he screamed as he snatched it from me. “That’s it! That’s it!” jumping about as he held it in the air. “I knew it’d be here, I knew it!” and he hadn’t even checked if all the money was there.

Suddenly, he clutched it to his chest and dropped his voice as a look of fear crossed his face. “I can’t give you a reward, man. I need all of it, I really do.” he said, talking too much.

But what was the catalyst for that moment? It wasn’t the guy. The initial action of losing the wallet was not intentional, it was accidental. It wasn’t me. I was minding my own business when I stumbled upon the wallet. The catalyst?

It was the wallet!

The guy and I both believed the wallet had worth, therefore we had a shared belief which leads to action. And though we did not communicate with each other on what to do, our actions were similar in response because of the belief.

All this to say: the belief of worth brings action to bear that fulfills the belief.

So what? What do you believe about yourself? You living the dream or just flat screening it tonight? If you have no belief in a God or at least, yourself, then you’re the empty wallet and you’re not going back for what you lost. You’re just cruising from one disappointment to the next hoping things work out. Well, they won’t, “work out.” It never does! If your past is a graveyard of buried mistakes and forgotten opportunities overgrown by doubts, it’s because you lack the belief to process and leverage into success. And you know, most people don’t know what to do. And it’s because it’s the amount of damage control they feel their up against. It’s overwhelming! But here’s the question:
Most people, when they get short changed or feel cheated, go and get their money back. Why aren’t you going back and getting what you lost?

Why aren’t you going back for that wallet? Because you believe it’s empty and you somehow feel like you deserve that. But I’m telling you, to leave money on the table, to work cheaper that what you’re worth or to pay more for something than its price is wrong! It’s wrong! But it’s your responsibility to get what you’re worth! Which means you have to speak up for yourself. It’s not my job to speak up for you. It’s not your spouses or your mama or boss or anyone else, it’s you. You, you, you! You want what you feel like you deserve then reach for it and get it. If they stop you, try again, you are worth it and to believe otherwise is to sell yourself short of your worth. I got over 24 years working in psych as a therapist and a life coach and a vast majority of negative behavior that people exhibit is due to a negative view of their own self-worth. Their settling for ashes when inside, they really want better. That emotional dissonance creates a lot of baggage over time, simply because they believe less of themselves than their own loved ones do. I got a saying I use around the hospital, “If it’s not okay for me to say it to you, it’s not okay for you to say it to you.”

When I got back to my bike, the guy had already left in a trail of smoke and rubber. I selfishly shook my head and thought in a moment of self-pity, “He didn’t even say ‘thank you.’”

But then I thought better of myself, “That’s not why I did it.”